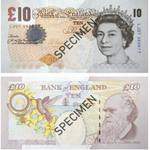 Another category that comes under pounds bills is the 10 pound bills.

As this note is largely in demand and so our company produces it in high quality which makes it looks real and genuine.

What makes us stand apart in the market from others?

The Bank of England £10 pound note, also known informally as a tenner, is a sterling banknote.

It is the second-lowest denomination of banknote issued by the Bank of England.

The current polymer note, first issued in 2017, bears the image of Queen Elizabeth II on the obverse and the image of author Jane Austen on the reverse.

The final cotton paper note featuring a portrait of naturalist Charles Darwin, first issued in 2000, was withdrawn from circulation on 1 March 2018.

10 pound notes were introduced by the Bank of England for the first time in 1759 as a consequence of gold shortages caused by the Seven Years’ War.

The earliest notes were handwritten, and were issued as needed to individuals.

These notes were written on one side only and bore the name of the payee, the date, and the signature of the issuing cashier.

With the exception of the Restriction period between 1797 and 1821, when the French Revolutionary Wars and the Napoleonic Wars caused a bullion shortage, these notes could be exchanged in full, or in part, for an equivalent amount of gold when presented at the bank. If redeemed in part, the banknote would be signed to indicate the amount that had been redeemed.

From 1853 printed notes replaced handwritten notes, with the declaration “I promise to pay the bearer on demand the sum of ten pounds” replacing the name of the payee.

This declaration remains on Bank of England banknotes to this day.

A printed signature of one of three cashiers appeared on the printed notes, though this was replaced by the signature of the Chief Cashier from 1870 onwards.

The ability to redeem banknotes for gold ceased in 1931 when Britain stopped using the gold standard.

The £10 pound note ceased to be produced by the Bank of England in 1943, and it was not until 1964 with the advent of the series C notes that the denomination was re-introduced.

It featured a portrait of Charles Darwin on the back as well as an illustration of HMS Beagle and images of various flora and fauna.

The note featured a number of security features in addition to the metallic thread, including raised print, a watermark, micro lettering, a hologram, and a number ten which only appears under ultraviolet light.

In 2013, Mark Carney, Governor of the Bank of England, announced that a newly designed £10 pound banknote, in polymer, rather than cotton paper, and featuring early 19th-century novelist Jane Austen, would be issued