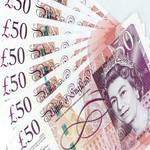 As these 50 GBP bills are less used in the England markets, so our company focuses on producing these notes either in less quantity or as per requested by the clients. The stock availability is 40 which can be further extended as asked by the regarded buyers.

Know more about our Fake money:

If some the difficulties arise, you can easily contact us, we will correct them as soon as possible. For more, you can visit their official website. Thank you for shopping at  https://www.properbills.com

The Bank of England £50 GBP note is a sterling banknote.

It is the highest denomination of banknote currently issued for public circulation by the Bank of England.

The current note, the first of this denomination to be printed in polymer, entered circulation on 23 June 2021.

It bears the image of Queen Elizabeth II on the obverse and computer scientist and World War II codebreaker Alan Turing on the reverse, with his birth date reflecting the release date.

Cotton £50 GBP notes from the previous series will remain in circulation alongside the new polymer notes until 30 September 2022, when this last ‘paper’ banknote issue will finally cease to be legal tender.

£50 GBP notes were introduced by the Bank of England for the first time in 1725.

The earliest notes were handwritten and were issued as needed to individuals.

These notes were written on one side only and bore the name of the payee, the date, and the signature of the issuing cashier.

With the exception of the Restriction Period between 1797 and 1821, when the French Revolutionary Wars and the Napoleonic Wars caused a bullion shortage, these notes could be exchanged in full, or in part, for an equivalent amount of gold when presented at the bank.

If redeemed in part, the banknote would be signed to indicate the amount that had been redeemed. From 1853 printed notes replaced handwritten notes, with the declaration “I promise to pay the bearer on demand the sum of fifty pounds” replacing the name of the payee.

This declaration remains on Bank of England banknotes to this day. A printed signature of one of three cashiers appeared on the printed notes, although this was replaced by the signature of the Chief Cashier from 1870 onwards.

The ability to redeem banknotes for gold ceased in 1931 when Britain stopped using the gold standard.

The £50  GBP note ceased to be produced by the Bank of England in 1943 and did not reappear until it was reintroduced in 1981.

These D series notes were predominantly olive green on both sides, with an image of Queen Elizabeth II on the front (as with all subsequent £50 notes) and an image of architect Christopher Wren on the back. As a security feature, this note had a metallic thread running through it, which was upgraded to a “windowed” thread from July 1988 onward.

The thread is woven into the paper such that it forms a dashed line, yet appears as a single line when held up to the light. The series D note was gradually replaced by the series E, beginning in 1994.

This reddish note replaced Christopher Wren with John Houblon, the first governor of the Bank of England, on the reverse. As an additional security feature, these notes had a foil patch on the front.

The E revision series did not have a £50 GBP note.