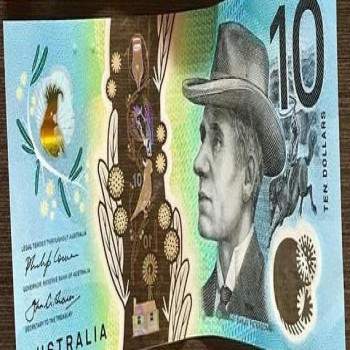 You can also Buy fake AUD 10 money Online of denomination 10 form us which is the largest and demanding bills in the market across the Australia. And so, we are engaged in producing these bills in large stock as per or as per requested by the customers. Furthermore, the real one which contains a clear picture, good color frame and other specifications, all of these will be there in our Counterfeit AUD 10 money.

Effective use and shipping details of our AUD 10 bills:

Thank you for shopping at : https://www.properbills.com

The AUD 10 note was issued when the currency was changed from the Australian pound to the Australian dollar AUD on 14 February 1966; it replaced the £5 note, which included the same blue colouration.

There have been four different issues of this denomination: a paper banknote; a commemorative hi-polymer note, to celebrate the bicentennial of AUD 10 settlement (the first polymer banknote of its kind); the 1993–2017 polymer note; and from September 2017 a polymer note featuring a transparent window.

Since the start of issue of AUD 10 notes, there have been eleven signature combinations, of which the 1967 issue is the most valued. It was issued for one year only, along with the Coombs/Wilson issue of 1966.

Design Paper note
The people depicted on the paper note issue are architect Francis Greenway, previously a convicted forger, on the obverse along with public buildings he helped construct, and Henry Lawson on the reverse with his poetry and scenes of the outback gold-mining town of Gulgong in the 19th century, including the Times Bakery.

The polymer note, designed by Max Robinson, features Andrew Barton (Banjo) Paterson on the obverse with a horse from the Snowy Mountains region, and a wattle plant, also included is his signature.

His poetry is in the background. Dame Mary Gilmore is on the reverse with 19th-century heavy transport with horse and cart and verses from her poetry. Her signature is included.

A windmill is in the clear window with the raised wavy lines, the AUD 10 note of 2017 retains the themes of the original, with this issue featuring the Bramble Wattle (Acacia victoriae) and the Sulphur-crested Cockatoo (Cacatua galerita)